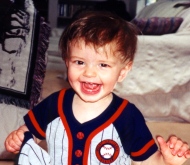 My oldest son as an infant and toddler was a very happy boy. Always laughing, playing and making jokes. He charmed everyone he met and my husband and I were told by several complete strangers that he was “too happy”. How can a child be too happy?

As he grew older, he would often complain about his stomach hurting, usually after eating a meal. He liked to eat macaroni and cheese, grilled cheese sandwiches and quesadillas. He also loved popcorn and tortilla chips as snacks. I usually dismissed his complaints as a need for him to use the bathroom and didn’t give it a lot of thought, but I did try to pay attention to what foods he ate to see if any resulted in him feeling pain. I didn’t keep a food log for him, although perhaps I should have. I did know he had an intolerance for lactose, but I gave him supposedly lactose-free milk and the stomach pain often didn’t seem to be associated with dairy.

The years went by and slowly my happy, confident son started to turn into an introverted and sad boy. By the time he was in 5th grade he was always upset, usually with himself for no reason that I could fathom. He would frequently cry himself to sleep, be over-the-top worried about upcoming tests in school and not want to participate in many family activities. He was fearful of houses on hills and anxious in social settings. He had immense trouble making decisions. My very intelligent son was also getting poor grades in school. At the age of 9 he told me he thought he had depression, and I found myself agreeing with him.

The first thing I did as a mother was to reach out to our school district’s nurse, his pediatrician, our health insurance company and local therapists who treated pediatric patients. I was told that it was very difficult to find treatment for a child so young who also didn’t have behavioral problems. I felt very helpless trying to find any assistance for my son, as none seemed to be available. I wonder, given my experience, why I didn’t think his condition was due to an allergy for the better part of a year. I still carry that guilt that the possibility didn’t occur to me sooner.

So once I realized that my son might have a food allergy or sensitivity, I quickly took action. It was ok for me to try alternative medicine, but I wanted to be sure he really was allergic to any food allergens by taking him to be screened by an allergist. It was difficult, but my son was tested for 72 different food allergens that day. The results were conclusive. He was allergic to oranges, apples, shrimp, almonds, scallops and CORN.

He loved eating tangerines by the bag and scarfed down substantial amounts of corn in its varying forms. The aforementioned popcorn and tortillas chips, as well as fresh corn. I immediately removed all of these foods from his diet, but I was especially concerned about the corn. It’s in almost all processed foods so I had to learn how to feed my family without corn.

None of his reactions were severe, and I remember the doctor saying something like “It shouldn’t hurt him to eat these foods once in a while” but after all the research I had done, I knew better. I also did a bit of searching on the web that day for children with corn allergies. I came across one very useful blog by Jenny Conners that mentions children with corn allergies as sometimes being moody. That opened my eyes and helped validate what corn was doing to my son. And all that cheese he was eating in addition to the corn? Cornallergygirl posts in her blog that corn is used extensively in the production of most cheeses in this country.

Two weeks. Two weeks without corn. In two weeks, my son stopped crying and I saw him smile again for the first time in months. He laughed again and slowly started to regain some confidence in himself. In two weeks he was back to getting A’s and B’s  in school. All without any drugs or therapy. All because of corn, food that is supposed to be healthy to eat.

When I discussed my son’s symptoms with his health care professionals and the reversal of his depression, the most common response I received was that of course he wasn’t depressed anymore since he felt better from not eating the foods that were causing him stomach pain. No. It was definitely more than that. He felt depressed even without stomach pain. His stomach pain was transitory, not constant, unlike his depression, which was always with him.

Even now, years later, if my son eats corn or something with certain corn products, he will become depressed and find the most mildly stressful things like school assignments completely overwhelming. He will have trouble sleeping and even have thoughts of hurting himself. He will think he’s not deserving of good things in his life. These negative feelings always go away within a few days.

So there is the story of my son’s childhood depression. Based on my article research, I believe his allergy to corn caused chronic inflammation which depleted his blood serum tryptophan to such low levels as to affect his CNS serotonin production, thus leading to depression. For me, I experienced this through an intolerance to wheat. It could be another food for someone else. If the allergic or sensitivity response is low, it make take months or years to manifest and the symptoms could be vague and not classic allergic reposes such as itching, rash, hives, swelling and trouble breathing. The symptoms could be fatigue, brain fog, dizziness, vertigo, IBS, anxiety and depression.

There are some researchers who are studying the link between other types of allergies like airborne allergies to depression. I would like to cover that topic in a future post.

This site uses Akismet to reduce spam. Learn how your comment data is processed.